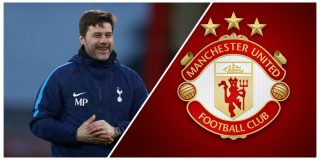 Mauricio Pochettino is seemingly planning ahead after it emerged that the Tottenham Hotspur boss is house hunting near Manchester ahead of a potential switch to Old Trafford.

That’s according to Michael Brown who revealed on 5Live that he might have a new neighbour soon after hearing the Spurs boss has been in the market for a new house.

Pochettino would be taking a different approach to former manager José Mourinho if we is to move to Manchester, opting to live in the comfort of a home as opposed to a hotel.

The Argentine coach is thought to be first choice to become José Mourinho’s permanent successor, but Ole Gunnar Solskjaer won’t be leaving Old Trafford without a fight.

Despite Solskjaer’s inexperience as a football manager, at the top level at least, he has gone 10 games unbeaten, winning 9 of those across all competitions.

United are also back in with a shout of a top four finish – something that was a distant possibility just one month ago, though the Reds have narrowed their gap from Chelsea to just two points while overtaking the Gunners.

Brown said on 5Live, as quoted by the Daily Star: “Yes, Ole Gunnar Solskjaer’s gone and won, yet again.

“I’m sure they will still be going for Pochettino myself. I live in Alderley Edge. I’ve heard he’s house hunting.”

Brown, who came through the Manchester City academy, is a retired footballer and former football manager.