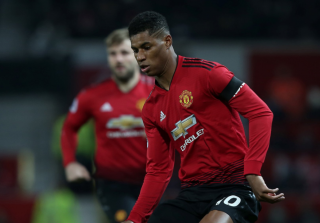 Marcus Rashford has opened talks with Manchester United over a new contract with the club working to secure the England striker’s long-term future and ward off interest from Real Madrid, as reported by the Telegraph’s James Ducker.

Rashford has been a key component to United’s resurgence under caretaker manager Ole Gunnar Solskjaer, scoring six goals in his past 10 matches and putting in some really convincing performances, which has been enough to edge Romelu Lukaku out of the line-up.

United only recently tied France forward Anthony Martial down to a new five-year deal last Thursday and want Rashford to follow in his teammate’s footsteps by agreeing on fresh terms.

This is clearly a process to ensure United have world-class attacking talent for years to come, with The Sun also claiming that Paul Pogba would like a new deal at the club.

Rashford’s current deal expires at the end of the next season and United may have an option to extend it by another year, but negotiations are under way and the 21-year-old could double his wages to more than £150,000-a-week with bonuses.

The Sun ran a story recently suggesting Real Madrid had not given up on their pursuit to sign Rashford after being made aware of how unhappy the player became under José Mourinho.

The Telegraph adds that Rashford sees his long-term future at Old Trafford, with the club ‘viewing him as absolutely integral to their plans’.

United must also get the work on a new deal for David de Gea. Stretty News understands the club is relaxed about the situation, with the Spain no.1 also set to commit his long-term future to the club.