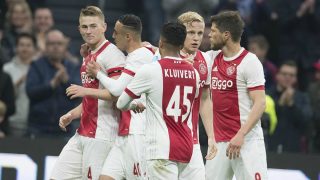 Ajax starlet Matthijs de Ligt has reportedly rejected the idea of signing for Real Madrid, with a switch to the Premier League on the cards if the defender doesn’t get his preferred switch to Barcelona.

Barcelona have already sealed the signing of De Ligt’s Ajax teammate Frenkie de Jong, and it is thought that they would like to play together beyond this season when the latter officially joins the Camp Nou side.

The report adds that De Ligt will wait for Barcelona to see if they make a swoop in the summer, but the player is also focused on Ajax, who are second in the Eredivise and still in the Champions League with a knockout clash against Real Madrid just around the corner.

Manchester United know they need to sign a centre-back in the summer with the defence far too weak to mount a proper title challenge, and that must be the aim next season, no matter who is in charge.

Don Balon also claim that a move to the Premier League would become priority for De Ligt if Barcelona don’t know knocking on the door. Liverpool, Manchester City and Chelsea are all listed as potential destinations.

According to Transfermarkt, De Ligt is valued at €65 million, a substantial amount for a 19-year-old defender.

Victor Lindelof has been incredible the past month and needs a solid partner at the back. De Ligt is not the finished article which is what United need, but a player with his potential would be a fantastic signing.

It’s not as if United have any reasons to penny pinch, though we all know what the Glazers are like…

The Reds have been closely linked with Napoli defender Kalidou Kouilbaly with ESPN claiming United will wait for the summer to make a move for the Senegal international.