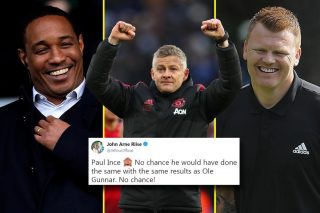 Paul Ince claims that he could have had the same success with Manchester United as Ole Gunnar Solskjaer in an attempt to downplay the Norwegian’s work as caretaker manager over the past month.

When asked whether he felt anyone could have done the same job as Solskjaer, Ince told BT Sport: “I believe they could, yes.

“You could’ve done it [pointing to Chris Sutton.”

Ince’s comments caused quite a stir on social and even prompted a response from former Manchester United centre-back Rio Ferdinand.

Liverpool fans’ favourite John Arne Riise is the latest to comment on Ince’s claims. He said on Twitter: “Paul Ince… no chance he would have done the same and got the same results as Ole Gunnar. No chance!”

Paul Ince 🙈 No chance he would have done the same with the same results as Ole Gunnar. No chance!

Stupid comments, really, but else would you expect coming from a failed manager trying to make himself relevant again?

Ince didn’t win any of his last 9 games as a football manager – losing eight and drawing one – yet he has the audacity to claim he would have achieved the same as Solskjaer over the past month at United?