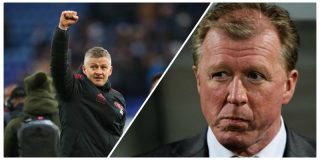 According to former Manchester United assistant coach Steve McClaren, the club have an “easy decision” to make with regards to appointing Ole Gunnar Solskjaer as full-time manager.

McClaren believes handing the caretaker position to Solskjaer, who he worked with at United as a player, has proven to be “an unbelievable move”.

The interim boss remains unbeaten since being given the United job until the end of the season, following José Mourinho’s sacking in December. He has won nine of out of his 10 games while drawing 2-2 with Burnley at Old Trafford last week.

Solskjaer’s results have put the Norwegian coach in contention for the job on a permanent basis, but former teammate Gary Neville thinks he should be properly assessed by the end of March or early April, as reported by The42.

Rumours continue to do the rounds about Tottenham manager Mauricio Pochettino being the top target but McClaren seems ultimately convinced by Solksjaer’s work thus far.

The next month will provide Solskjaer with some stern tests though, with United facing Paris Saint-Germain in the Champions League before an FA Cup fifth-round tie with Chelsea is followed by league fixtures against Arsenal and Manchester City.

“It’s proven an unbelievable move,” McClaren told Sky Sports. “I know Ole well. He is a thinker. He is intelligent. He is very good at communicating with players and I think that has helped.

“He has gone into a situation, which many people said he had nothing to lose – he had everything to lose. No pressure? Enormous pressure! It is one of the top three clubs in the world.

“So that is pressure to manage them. And I know pressure also in yourself that you want to do well so I know Ole’s ambitions going in there and I think he has excelled [above] all expectations.

Solskjaer has already won big games away to Spurs and Arsenal, so he shouldn’t be fazed by any tough opponents, especially considered PSG lost a recent Ligue 1 clash against Lyon. The United caretaker manager was in attendance with assistant coach Mike Phelan to scout his side’s upcoming opponents.

McClaren adds how he believes Solskjaer has put himself in prime position for the job beyond this season.

“It looks like he will keep winning,” he said. “People must look inside and what he is doing with the players and the job he is doing.

“I have got to say he has got tremendous staff around him. I know Mike Phelan, who must be a great help. Staff are also very important and the staff have rallied around.

“The players have bought in very, very quickly. They have adapted to what he is trying to give them and it is working. If it continues to work I think Manchester United will have an easy decision at the end of the season.”

United travel to Fulham on Saturday for an early kick-off.