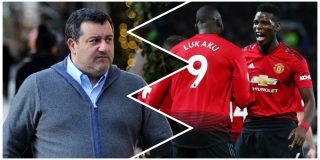 Romelu Lukaku has reportedly been offered a move to Real Madrid by his agent Mino Raiola.

The Belgium international faces a battle to earn his place back in the Manchester United starting eleven with Marcus Rashford the preferred centre-forward under caretaker manager Ole Gunnar Solskjaer.

It’s a very different scenario for Lukaku, who joined United from Everton in 2017 for an initial £75 million, as reported by BBC Sport.

Lukaku hit double figures in his debut season scoring 16 goals in the Premier League, along with 7 assists, as per WhoScored.

This season, however, Lukaku has not performed at the same level but still has 8 league goals to his name.

Rashford has 9 goals so far in the Premier League this season, but a much better assist return (6 against Lukaku’s 0), so it’s hard to argue with Solskjaer’s decision to start the England international.

Despite showing some improvement in from, Lukaku was lambasted for not making a run and creating space against Leicester City on Sunday, infuriating teammate Ashley Young and Manchester United fans on social media.

Now speculation suggests Lukaku could be set for a move away from Old Trafford.

According to Spanish outlet Don Balon, Lukaku is valued at around €95 million with Raiola trying to get him to the Bernabeu.

Real Madrid, sitting third in La Liga, are still in the process of filling the void left by Cristiano Ronaldo and are certain to try find a goalscorer in the summer.

Karim Benzema is 31-years-old and has 10 La Liga goals to his name this season, surpassing last season’s below bar tally of 5.

However, Lukaku has shown in the past that, on his day, he can be one of the best strikers in Europe.

It has become a concern that Lukaku has not reached those heights this season.