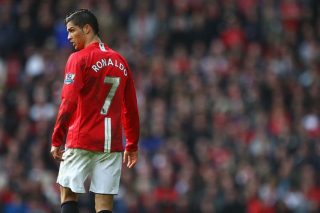 Cristiano Ronaldo is celebrating his 34th birthday today and will doubtless be beaming like his flattering statue standing proudly in his hometown of Madeira.

Manchester United were quick to recognise his landmark day this morning on their various social media. Perhaps somewhat surprisingly, the post drew mixed responses from supporters given his achievements during his time in Manchester. Fans voiced their displeasure at numerous things, including his agitating for a move and as recent as celebrating for Juventus against United.

Best wishes to former #MUFC star @Cristiano on his birthday!

Have a great day! 🥳 pic.twitter.com/V89i6hfHZb

It got me thinking… How exactly is Cristiano Ronaldo received by United fans these days? In all honesty, I am a bit aghast at how much he has turned out to polarise opinion.

In short, Manchester United made Cristiano Ronaldo into the world-class, superhuman goalscoring specimen he continues to be. We were all incredibly blessed to see his transformation from a raw, skinny, almost immature into a footballing powerhouse with an unwavering desire to achieve his goal of becoming the world’s best footballer.

We were all party to the inevitability that Ronaldo would one day seek pastures new, with the lure of Madrid for a Latin player a nigh on impossibility to refuse. History dictates that to us and Ronaldo became just another one to the list in that regard. No-one could begrudge him that move either. He had earned it. So it was not the move as such which wrangled with me, despite the fact it is always a wrench to lose such a talent like that, arguably the greatest natural talent in many a person’s book.

It was the manner in which the move transpired: Yes, Ronaldo gave his utmost on the pitch during the extra season we got out of him, despite his glum demeanour at times, but to give himself the bogus classification of a ‘slave’ (via Guardian) at one of the world’s biggest clubs was classless and disrespectful.

In hindsight, you would hope Ronaldo acknowledges that as an aberration, however fans do not forget statements of that nature. That will always remain a black mark, irrespective of his undoubted achievements and standing.

I put the question to some of my fellow Stretty News writers, so without further ado here are their opinions on the matter:

Where does Cristiano Ronaldo rank among you reds? Do you harbour any resentment, or do you merely appreciate we had a footballing legend who we made?

Cristiano Ronaldo is the greatest footballer I have seen. He provided moments in games I will forever cherish as a red, but he did make that ‘slave’ comment while engineering a record-breaking transfer to Real Madrid.

The Portuguese star is media trained to the core and knows exactly what to say and how to act when the cameras are switched on. He calls Manchester his home but it hardly featured in the documentary ‘Ronaldo’, which made clear his almost unhealthy obsession with Lionel Messi.

No sour grapes. I loved the Portuguese Michael Flatley tribute act at United and even met him once. A lovely lad I can tell from that brief exchange, and he deserves to have his name sung by the Old Trafford faithful to this day. Viva Ronaldo!

I was there for his debut. Sat there against Bolton knowing we’d signed this kid who is meant to be phenomenal, and he didn’t disappoint. Kevin Nolan could only try and volley him into the Stretford End as this scrawny, goofy looking teenager made mincemeat of their defence, it was exhilarating. I came away from Old Trafford misty eyed having seen this young lad massacre 11 other blokes with ease.

Unfortunately his ambition was the downfall of his stay at us, had he been happy just sticking in the one place then the post-Sir Alex era would have kept being a successful one. He was just the complete player, agonisingly frustrating in his early 20’s but once it all clicked he was just poetic. I was there for the free kick against Portsmouth too, he’s given me so much.

I won’t lie, when he said he wanted to leave the club first time round, I hated him. I cheered the goals but never the name, I took it rather poorly I must admit. But you see the respect he pays Sir Alex, and the way he didn’t celebrate knocking United out of Europe (though if he was truly that nice he wouldn’t have) showed his true colours and the real place the club holds in his heart. It’ll never happen, but every summer I still faintly hope it is finally the one he does come home.

Ronaldo came to Old Trafford as a talented but temper-mental teen with the world at his feet. He left as a man, legend and the greatest player I have ever seen live in the red of United. To watch him grow from swashbuckling show-pony to the greatest player the world has even seen was, and is, an absolute pleasure.
Unlike some of the players he played with, I had no problem with him leaving as it was his dream to play for Real Madrid and he agreed to stay on an extra year at United even despite the “slave” comments, although I suspect this was lost in translation and may been misinterpreted. I do not hold that against him, although my only regret is that it would have been nice to have had him at the club for a few more years.
Like many I suspect, I still somehow hold the faint hope that he will one day return to Old Trafford to finish his career at United. I felt he never really got the chance to say goodbye properly and he deserves to do that. Thanks for the memories Cristiano, you will always be a true United legend.

Summer off work with a broken foot was basically spent absorbing 3 things.

When the Brazilian was unveiled at Barcelona, what was left of my bacon addled heart was shattered. Having lost Beckham to Real Madrid, we were heading into the season with a huge great hole in the side.

As pre-season wound down, we played our final friendly in Lisbon to open Sporting’s new ground. From the moment a young man by the name of Ronaldo got on the ball I was in actual love. Proper love!! That kinda love that boy bands who can’t dance, so sit on stools singing about it.

Seeing confirmation he’d been signed up by United shortly after that incredible display gave me huge hope for the future. His early United career showed that he had unbelievable ability, but he needed to learn how to apply it properly to the game to be a blessing to the team and not the huge source of frustration he could be as things went wrong. It was clear from the start of the 06/07 season that he’d began the process of achieving domestic greatness. Since that period he only drove on to become better and better. He’s continued to do this throughout the rest of his United, Real & International career. A genuine talent of a generation I’m grateful to have had the honour of seeing in a United shirt.

As an Arsenal fan, the memory of following Cristiano Ronaldo’s development has always strangely stood out.

As some Man United fans will no doubt remember, it was about the same time that we had Jose Antonio Reyes coming through at Arsenal. Hilariously, I remember comparing the two closely as I felt strongly that it was the Spaniard who would go on to become one of the best in the world, while Ronaldo was a lanky step-over merchant who’d been totally over-hyped because of his name.

It slowly became *painfully* apparent that I’d got this badly wrong as Ronaldo tortured us time and time again, and became an absolutely fearsome goal-scorer, guiding United to one big trophy after another. Reyes, meanwhile, basically disappeared after just a couple of seasons, never to be seen again.