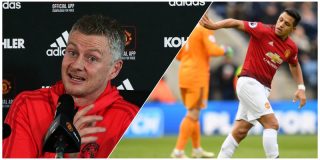 The Chilean was hooked after an hour as Solskjaer looked to reinvigorate a flat-looking United side, who were beginning to look almost as sluggish as they did midweek against Burnley. At least this time around we didn’t drop any points.

The former Arsenal winger has struggled to find form since his transfer up North to Old Trafford last January. So far we’ve only seen glimpses of what he can do which is a concern considering Sanchez is the highest-paid player at the club.

However, Solskjaer refused to criticise Sanchez and credited him for his defensive work. While there was no mention of any offensive play, the Chile international recovered the ball exceptionally while grounded in the first half.

Ole on Sanchez: “He worked really well defensively. He is coming and improving all the time.” #mufc [BBC]

But the 30-year-old must improve his game between now and the end of the season.

As things stand, Sanchez is not on the same page as Marcus Rashford, Anthony Martial and Paul Pogba.

We need to see an improvement now…