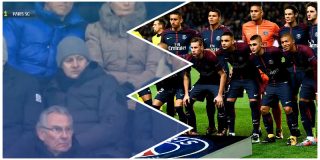 Paris Saint-Germain defender Thiago Silva has sent a message to Manchester United boss Ole Gunnar Solskjaer as he scouted the French giants ahead of their big European clash.

The first of the two legs takes place at Old Trafford next week, and Solskjaer flew out to Lyon for their match with assistant coach Mike Phelan after United beat Leicester City at the King Power Stadium.

Speaking after the game, Silva was aware that Solskjaer had been in the stands watching PSG. They were beaten by Lyon, who came from behind to narrow the Paris side’s lead at the top.

MORE NEWS: Exclusive: Former Man Utd youth player reveals what it’s like to play for the biggest team in the world

Silva admitted the way PSG performed would have made Solskjaer happy but added that United should expect a different kind of performance in the Champions League next Tuesday.

But it’s not as if last night’s Ligue 1 clash was ever going to be a one-way conclusion. Lyon are a decent side – beating and drawing with Manchester City in the Champions League group stages – and PSG have some way to go before the championship is wrapped up.

‘Solskjaer must be happy with what he saw,’ Silva is quoted by Goal.

‘We started the game well, but then we lost our concentration and did not have a good first half.

‘For me, too, it was difficult. The second half was better but that was not enough. We missed a lot of things. We need to be more focused when we do not have the ball, for example.

‘But do not be worried about us. Next Tuesday, in Manchester, it will be another competition, another environment, another atmosphere. In the meantime, we have to work between us to show something else.’

PSG confirmed last week that Neymar would miss both legs with a foot injury.