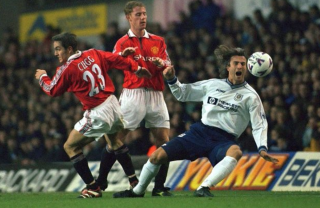 “I never thought I would have the opportunity to play for a football team,” claims Michael Clegg – the man who did go on to play for Manchester United after being with the Reserves, but his career and life then a took a U-turn from there on.

The son of a former Manchester United fitness coach and trainer Mick Clegg, Michael had values of working hard and never giving up ingrained into him at an early age. His dad went onto work at United for over ten years, coaching the likes of Cristiano Ronaldo, Wayne Rooney, the class of 92 and Ole Gunnar Solskjaer.

“My father opened a gym 35 years ago, I was six years old. We used to spend a lot of time in the gym, my father was coaching the people and creating an environment which creates me; I understand about discipline and working hard.”

READ MORE: Chelsea may be close to giving Man Utd an easy decision to make on Ole Gunnar Solskjaer

The man from Ashton under Lyne, Manchester, never really thought he would play for the biggest club in the world. Like many young players of his age during the early teens, life in football seemed uncertain and he didn’t know what was coming.

“I managed to get into a very good team called Droylsden. The rest of the players, they had contracts with the bigger football clubs: Rochdale, Man City and Oldham. I didn’t think I will have the opportunity to play for a football team.”

He had almost accepted the fact that he would not make it. While he hadn’t given on his dream to carry forward what his father had been doing, Michael had all but made his mind to go to college and study more.

He says: “I had almost started applying for college. I wanted to study PE, psychology and biology.”

But just when his life could’ve taken a different path, Manchester United came calling from out of nowhere. He never knew it would happen and it was later that he realised that he was being watched over a longer term.

“Right at the last minute, during the fifth year of school I got scouted by a Man United scout. He saw me and said: ‘I’ve been watching you and I’ve always wanted to give you the opportunity to come to Man United.’ All the positions were taken, but defenders got injured and I was invited for a trial.”

The former defender admits that it was a dream come true to play for United and he was brimming with pride when he pulled the famous red shirt on. He refers to it as the ‘best day’ of his life.

“I went on a trial. We played against Blackpool on a winter morning It was the best day of my life — pulling that Man United shirt on. Ultimately, I did really well. I scored a goal. The manager of the team back then was the England Under-18s manager. I went for 5 or 6 trial games and was signed on as a youth player.

“I spent two years in the youth system. I was in it in 1993 and that youth team won the FA Youth Cup in 1995 and we were about two years younger to the class of 92 — Beckham, Scholes, Giggs and all those guys. We had Phil Neville in our team, we had Paul Heckingbottom and a couple of other players, Terry Cooke and David Johnson.”

Despite having made the cut for the reserves’ side, Michael still wasn’t sure about whether to continue playing football and make it to the first team at the club or whether to head to the United States to make a career in education. He says: “Sir Alex Ferguson offered me a professional contract. I wasn’t sure what to do. I could’ve potentially gone to America, go to trials for scholarship as some colleges and five or six universities saw me.

“I was always into education. I always liked the idea of going into a university. But again, it was about how could I turn down the chance of a professional contract with Manchester United!?”

It was Sir Alex who confided in Michael and turned him into a right-back because he was too small in size to play centre-back. He says: “I spoke to Alex Ferguson, who was a great guy. He told me ‘at this moment in time, you’re playing as a central defender. But you’re too small to play there and I will give you a chance to you to play at right-back.’ That season, I played under the guidance of Jim Ryan, someone who I really respect. He helped me develop as a player.”

Michael believes that the day he made his first team debut up north in Middlesbrough, it changed his life. Seeing his name pop up alongside the giants of the game and of the club was staggering. It was very unexpected indeed.

He says: “A year after, I managed to make my first team debut in 1996. I had never trained with the first-team before but there were a lot of injuries. I thought, wow, this will be a brilliant experience to see how it happens on match-day.

“I stayed all night at Chester-le-street and when I got to the Riverside stadium, they had all the shirts set out like it normally happens. I saw the shirts of Schmeichel, Clegg, Pallister and as I went further on- Beckham and Cantona. I was like: oh my god, I’m playing!

“Within that moment of shock, I got tapped on my shoulder and I turned around to see Bobby Charlton. He said: ‘Listen, son. This is going to be the greatest days of your life. You’re getting the chance to play for the biggest team in the world.'”

Michael describes his debut as a ‘blur’. It all happened too fast. Be it being unexpectedly handed the debut or how the debut came and went. He says: “I went out there and to tell the truth, it was a blur. The tie ended 2-2. I played against the likes of Ravanelli and Juninho, who were top players during that time.

“Being on the bus on my way home and Nicky Butt was sat next to me and he said to me: “This is going to change your life, how are you going to celebrate. Are you going to Manchester?” But I just spent time with my old friends, my local friends. Those I’ve loved and known for so many years. They’ve kept my feet on the floor, to my roots in Ashton”

That perhaps is a mark of a man who went onto stick to his roots, truly and fairly. Despite a promising debut for the Red Devils at Middlesbrough, Clegg could never become a regular. Loan spells at Ipswich Town and Wigan didn’t help and frustration was piling up. Two ankle injuries had only piled the frustration on. After his contract ended at Old Trafford, Clegg headed to Oldham, a club that were in a bad situation at that time.

“When my contract ran out at United, I knew it was time to leave. My agent was knocking on my door. Playing for Man United was a dream, but when it ended, I decided to play for a local team. It turned out to be the wrong decision, but a decision I took. It was a time of real ups and downs for Oldham. The club had financial issues and even went into administration.

“I worked under Iain Dowie, under whom we reached the quarter-finals of the League Cup. It was a good time. I made some really good friends and we still stay in touch. ”

He admits that it was his urge to do something that was in his blood that made him retire at an early age than usual. He wanted to be true to his roots, like always and wanted to go back to where he started all of it from.

“I had clubs interested, but I felt that I needed a new challenge- something which I said was in my blood. That’s when the coaching side of it became an option. I had to go back to the gym, train myself, train other people and ultimately get a good feedback loop. Where I was giving as well as taking. I loved it from the very first day.”

That day on, Clegg got to work in the football side that he’s always wanted to be in. 18 months into a newer occupation, it was his former teammate in Roy Keane who offered him a role alongside himself at Sunderland.

“When Roy Keane became the manager of Sunderland, I didn’t know Roy too much really as a friend, I knew him more as a teammate and a colleague. He respected me and my father, who had spent about a year with Roy when he had his bad injury. He offered me the opportunity to work with him at Sunderland and I obviously couldn’t turn him down.”

Clegg went onto work for 12 years at the Wearside club, working with Keane, Steve Bruce, Gus Poyet, Paolo di Canio and Chris Coleman. The Black Cats got promoted to the Premier League in 2007, as Keane made way for Bruce after Ellis Short took over. His father Mick though, went onto work at United for about ten years.

12 years on after leaving Sunderland as the club’s Strength and Conditioning Coach, Clegg is back at Ashton. Back to where his roots lie to work with his father. He now aims to develop and train sportsmen at the gym. Give them the training they need by become well-rounded athletes. And he’s joined forces with his father too.

He says: “We want to give people all the secrets and all the training that we’ve learnt in an elite environment and put out in a normal environment. So that the young and upcoming athletes get the very best of training in an environment that is very professional.”

The 34-year-old gym is still there and is still functioning fine. But it’s the new one that catches the eye. About a kilometre away from the old one, its much more modern and has incorporated all the training that Michael has done over the years at Sunderland and before.

He well and truly has taken the university route, having completed 5 years in it and now has a Masters’ degree in coaching and Strength and Conditioning. He’s a UEFA B-Licensed coach and has rekindled his love for coaching by teaching at companies at schools.

Above all, he’s a believer in continued learning through life and experience. He says: “Ultimately, my career never got to where I wanted it to be. But I learnt a lot of lessons from that and learnt from a lot of experiences.”

And while his career could have panned out differently, Michael is proud of where he is and what he’s done. He loves the fact that he’s back where he belongs, doing what he always wanted to do.

“I was always going to fall back to working in the gym environment. That’s my history. That’s my proud history.”