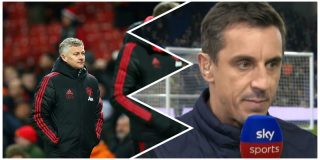 Gary Neville has revealed when Ole Gunnar Solskjaer should be properly assessed for the full-time managerial gig at Manchester United.

Neville, who was Solskjaer’s teammate at United, is not yet fully convinced United have found the right man for the job.

You could describe this as a honeymoon period for the Norwegian coach after lifting spirits in the dressing room.

If United are to hit a slump between now and the end of the season, Solskjaer’s quest for the job may also take a hit, although it would be intriguing to see how he’d cope with the challenge.

The Reds returned to winning ways on Sunday at Leicester, thanks to a Marcus Rashford goal in the first-half.

United currently sit fifth in the Premier League on 48 points, while Chelsea are two points clear in fourth position.

Neville feels it’s too early to make a call on Solskjaer keeping the job.

Speaking on the Gary Neville podcast, he said: “He’s had an incredible run. He’s got a far greater percentage chance now — maybe 50, 60% — but Chelsea away in the FA Cup, PSG in the Champions League, Liverpool, today against Leicester.

“There’s a huge challenge coming in the next five, six weeks and I think the end of March, early April is the right time to assess the body of work that Ole’s done.”

It would soften the blow if the blues were to stop the Scousers winning the title. Without football this summer, it will make life that bit more difficult for a number of months (until we can muscle up our own title challenge).

City are just two points behind Liverpool after their convincing 3-1 win over Arsenal on Sunday, however, Jurgen Klopp’s men take on West Ham tonight.

“I think two points or five points, whatever it will be tomorrow night after the end of the game, won’t be a gap worth shouting about at all.

“We’ve got a great three months to look forward to and at this moment in time, the only danger to Man City is City themselves, I think, because if City are neck-and-neck with three or four games to go, I think they will win it.

“They will really have the maturity to come through whereas Liverpool will need that three or four points gap.”

Listen to Neville’s podcast below.