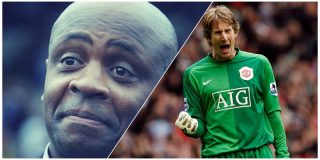 Ole Gunnar Solskjaer has done tremendously well as caretaker manager so far, and Parker believes Van der Sar could work alongside the Norwegian in the long-term future.

He won eight conservative matches but dropped points for the first time last week drawing 2-2 with Burnley at Old Trafford. The players showed great character to come from a two-goal deficit at the very end.

However, the Reds got back to winning ways on Sunday with a 1-0 win over Leicester City, thanks to a first-half goal by Marcus Rashford.

Parker passed comment on one of the key differences between Solskjaer and former manager José Mourinho, who was sacked in December.

“It’s all about the manner in which it has been done by Ole,” Parker wrote in his column for Eurosport. “Any manager coming in after Jose Mourinho was always going to make a difference.

“When you’ve gone from a grouch to a smiler, you are definitely going to get more out of people.”

United fans became increasingly frustrated by Mourinho’s demeanour before this season even started. He rarely looked happy, snapped at the media and often passed negative comments about several of his players.

Solskjaer has done the opposite in attempt to raise spirits in the dressing room and United immediately saw the benefits of a manager showing his players the utmost respect.

But now Parker feels United need to alter their model by appointing a sporting director. And his shout would see a very popular figure return to Old Trafford.

“Looking ahead, I feel they need a sporting director in the European model,” Parker added.

“Someone who has been around, is respected by agents, and knows them well enough to go and get the very players because of his reputation.

“Manchester United would be in a position then to attract serious players when they are competing against similar heavyweight clubs in the market.”

In the past, Ed Woodward has pretty much acted as United’s transfer advisor, and he’s not a very good one, never mind lacking the skills and knowledge to do the job properly.

“I think someone like Edwin van der Sar, the Ajax chief executive, would fit the bill because he has football and business experience which would make him the ideal candidate. He knows the club very well, is well respected at Manchester United as a person and for the fact that top players know his name too.”

It’s an interesting shout and the club should definitely consider Van der Sar for the position.

We’ve seen with previous managers that while experience is key, it’s not everything, otherwise Louis van Gaal and José Mourinho would have brought more success during their time in charge.

Whereas now, under Solskjaer, there’s a man who understands Manchester United at the wheel. He may be lacking in the experience market but the baby-faced assassin will learn a lot between now and the end of the season.