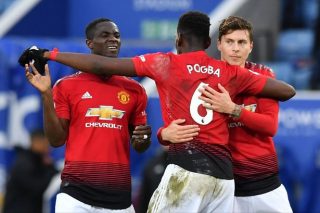 Manchester United have hardly put a single foot wrong during Ole Gunnar Solskjaer’s fairytale start to life as interim manager. One reality check against bogey team Burnley aside, the United legend has won hearts and minds in steering United to calmer, happier waters and on the precipice of the much coveted top four, which seemed a nigh on impossibility in the last few morose José Mourinho days.

Solskjaer has channelled his inner Paul Ince in masterminding United’s revival juggernaut. Whereas the self-proclaimed Guvnor is in the land of cuckoo, Solskjaer’s start has propelled him into the land of the Gods.

Sterner tests await which surely will decide his fate, but Solskjaer is putting in a mighty fine audition. He is sweeping in winds of change and we may have witnessed a notable change in Sunday’s hard fought victory over Leicester.

There is no doubt that Solskjaer has worked on shoring up United’s previously fragile defence, the goals against tally is reward for those hard yards. Equally common knowledge though is that a commanding centre-back is still a priority for the summer.

Phil Jones had, pre-weekend, been Solskjaer’s choice to partner the ever improving and assured Victor Lindelof. The Swede has confirmed his status as United’s first choice centre-back now, the question remains who can be his partner up to a busy summer.

For as improved as our defence has been, there will always be unwavering question marks over the once heralded next Duncan Edwards. Unintentional most likely, but Phil Jones will never rid himself of being the pitch clown be it his mannerisms, facials or proneness for a calamitous mistake. Fans are still subject to Jones filling them with dread, which is not in keeping with the hallmarks of a reliable United defender.

Eric Bailly has had his fair share of rash moments in as United shirt, mixed with plenty of very good. From giving away a penalty at Brighton to scything down Ryan Fraser of Bournemouth, earning a straight red in the process, Bailly has a few black marks against his name.

Bailly appeared rusty in conceding a corner under no pressure when a back-pass was wildly executed. Thankfully the blemish did not cost United and only served as blowing out the cobwebs as the Ivorian defended doggedly thereon in.

The glory sides of yester year would grind out ten 1-0 wins a season, where free flowing football was an academic subordinate in the grander scheme of three hard earned points. Sunday was a throwback to those days, albeit with United too far out of the equation this season.

A cornerstone of bygone successes was determined, bullish defending, invariably and most recently epitomised by Nemanja Vidic and Rio Ferdinand. Perhaps slightly hyperbolic as their partnership is in its infancy, but there were resemblances in Bailly and Lindelof at the King Power Stadium, where the home side’s power supply was largely cut out.

Eric Bailly has significant history with Leicester City – I was at Wembley in the Community Shield of 2016-17 to witness the Ivorian’s first taste of English football. I knew we had a player on our hands when not only did he match the turf scorcher Jamie Vardy for pace, but then bullied him off the ball and picking out a composed pass to boot. He was, and still is, raw but there is an unpolished diamond in there.

There was a further act of heroism when he took a shot flush in the face, leaving him rather dazed but it is that tenacity to put your body on the line that endears yourself to any network of fans, that feeling of impregnability, the ball isn’t going in my net today. David de Gea appreciated that the most, with a vociferous roar of approval and ferocious applause towards Bailly. It makes the world of difference and inspires confidence: De Gea was tested at Leicester in preserving his clean sheet, but not nearly as much as he was in the victory over Tottenham at Wembley. That was in no small part down to both his central defenders.

In times where you cannot rely on the injury prone Marcos Rojo, the error stricken Phil Jones and to a lesser extent Chris Smalling, Eric Bailly has to grab the opportunity in front of him with both hands.

Victor Lindelof’s development and rise has been an enormous plus this season, if Bailly can produce similar, United have a hell of a player on their hands.

The links with the likes of Koulibaly will not go away, nor will United’s need for a finished product at the heart of the defence, but Bailly deserves a sustained run in the side in the meantime.

Bailly can be extremely content with his showing at Leicester, the key now is to build on it ahead of the looming crunch fixtures.