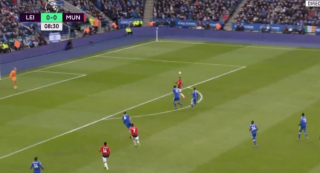 Leicester gave away the ball with a sloppy clearance before Paul Pogba pounced to win possession and lofted a beautiful through pass over the top to Marcus Rashford.

The England international then converted as cool as a breeze.

United had been dominating the game after a briefly concerning period at the very beginning.

Leicester looked like they were going to have a go at United but will need to improve on the ball if they’re to make any difference today.

A great way for Rashford to mark his 100th Premier League appearance in a United shirt.

The goalscorer missed a delightful opportunity just because he opened the scoring with a close header sent wide.

Let’s hope the Reds kick on and score more goals before half-time.