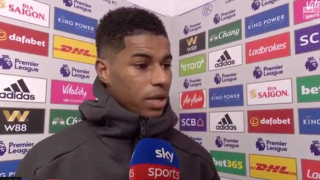 United opened the scoring after 8 minutes when Paul Pogba won back possession and quickly found Rashford with an over the top pass.

Leicester weren’t ready for United to pounce so quickly and the one goal proved to be enough to guarantee the Reds all three points.

But Pogba deserves credit for the form he’s shown over the past month and continues to provide the goods.

Rashford spoke about his French teammate after the win, praising him for setting up so many opportunities for other United players.

Rashford: “Time and time again he (Pogba) provides opportunities for the team, that’s what we want, if we can get him free he’ll make these passes all day long.” #mufc [Sky]

Watch the full interview below.

“I will play wherever the team needs me”