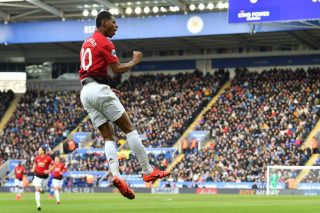 Marcus Rashford marked his 100th Premier League appearance with an early goal against Leicester City, which proved to be Manchester United’s winner.

United held on in large parts of the second half, but now go ahead of Arsenal in 5th place who place Manchester City in the late kick-off.

Rashford’s excellent finish was his 26th Premier league goal, and he has now amazingly eclipsed a host of United legends, including club record goalscorer Wayne Rooney in his tally for his first 100 league appearances for the club.

Rashford has been in sensational form of late, providing watch winning moments against Tottenham, Brighton and now Leicester in recent weeks.

Reds aren’t getting carried away with the player who only begun starting regularly in his preferred central role under Ole Gunnar Solskjaer.

However, United do have a fantastic talent on their hands who has the potential to score many more for his boyhood club.