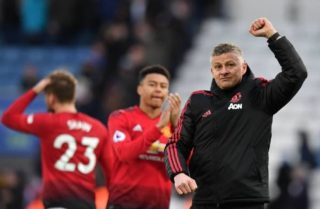 Ole Gunnar Solskjaer claimed his 9th win in 10 Manchester United games as his side held on against Leicester City to maintain their unbeaten start under the interim boss.

The Norwegian was delighted with the team commitment after the hard-fought victory.

“Our attitude was spot on. There are couple of bruised noses and knees,” Solskjaer told the BBC.

“It is supposed to be like this. There are three points on the line. Our lads sacrificed everything they had. They know they can do better than this but a clean sheet is always a foundation to build on.”

“He worked really well defensively. He is coming and improving all the time.”

Marcus Rashford’s early strike in his 100th Premier League appearance was enough for United, who were not at their best at the King Power stadium. His goal came after Paul Pogba pounced on a misplaced pass and fed the striker with a perfectly-timed through ball. Rashford remained composed and slotted his 26th Premier League goal.

David De Gea was forced into yet another stunning save, denying Rachid Ghezzal from a free-kick which looked destined for the top-corner as Leicester looked for an equaliser.

But United managed to see the game out, and Solskjaer’s side are now just two points off Chelsea in the race for the Champions League places.

The Reds face another away trip to Fulham next week in Saturday’s early kick-off, before their huge Champions League tie against PSG at Old Trafford next Tuesday.