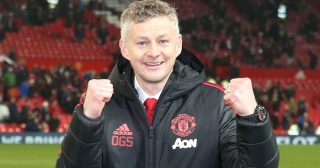 Don’t go back! It’s not as if they want you…

Caretaker manager at Manchester United, Ole Gunnar Solskjaer, says the man who permitted his short-term move from Molde to Old Trafford is backing him to get the job on a full-time basis.

Solskjaer admits Molde owner Kjell Inge Rokke ordered him to make himself indispensable when the Norwegian coach asked for a break to take on his dream job after José Mourinho’s sacking.

Prior to Sunday’s Premier League meeting with Leicester, Solskjaer said, as per The Mirror: “When I rang the Molde owner and told him that United had called, he always knew that this had been my dream.

“Do you know what he said to me? He said, ‘Go over, enjoy yourself – and please don’t come back.’

“In fact, both Molde owners wished me all the best, because they knew this is something I have dreamt about. To get the backing from them was fantastic.

“Of course, if I go back to Molde I will do my best for them – but it now depends when I go back.”

Solskjaer has done a terrific job of late and has been nominated for the Premier League Manager of the Month award after winning seven and drawing one of his first eight games in charge and putting United back in contention for Champions League qualification.

However, it remains unlikely that Solskjaer will be able to mount any success in Europe this season, albeit a possible alternative route into the Champions League next season.

The Mirror add their understanding of the situation: “And Sunday Mirror Sport understands that his [Solskjaer] chances of becoming United’s 11th post-war manager now hinge on him delivering a place in Europe’s premier competition for next season.”

Getting into the Champions League for next season is a must with a new manager and director of football. This might be a fresh start but we’ve said that too many times in this difficult post-Ferguson era.

You would have laughed if someone said United will finish in the top four when Solskjaer initially got the interim job a month ago.