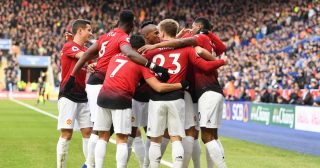 Rashford netted in his 100th Premier League appearance after Paul Pogba capitalised on Ricardo Pereira’s misplaced pass before playing a wonderfully-weighted to pass to the England international.

Moments earlier, many Reds had bemoaned a poor miss from Rashford following Luke Shaw’s excellent cross, but there was no mistake made in his next opportunity, as he thumped the ball past Kasper Schmeichel.

WATCH: Pogba sets Rashford up with stunning through ball against Leicester

United lead at the break but have allowed Leicester City back into the game and must improve in the second half to ensure all three points.

Check out some fan reactions to Rashford’s strike below:

That goal 🥅 from rashford(pass from pogba) is absolutely world 🌎 class.

That first touch by Rashford reminds me of Berbatov's.

A first class touch and finish from Rashford after a great pass from Pogba. Impressed with Shaw first half while Sanchez has been a bit lacklustre. We'll need that 2nd goal to settle us down.

Top goal from Rashford but we should’ve put them to bed in the first 15 mins, need a second goal to kill the game #MUFC #LEIMUN

Paul Pogba's assist for Marcus Rashford means he now has 20 goals and assists for #mufc this season.

The pass from Pogba is sweeter than sweet, and the control by Rashford is absolutely sublime…as for the goal, I am yet to find a word from the dictionary to describe it.

The First touch from Rashford leading to the goal …very exquisite! #mufc

What a goal damn 😭

But we need to play Sanchez the ball more