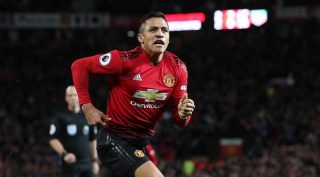 Ole Gunnar Solskjaer has named his starting 11 for Man Utd’s game against Leicester City at the King Power Stadium.

United will be aiming to extend Solskjaer’s unbeaten run as interim boss but face a tough test away to Leicester today. A win would move the Reds a point ahead of 5th place Arsenal who play Man City in the later kick-off.

Leicester, meanwhile, come into the game full of confidence after holding Liverpool to a draw at Anfield on Wednesday night.

Paul Pogba starts the game after recovering from a slight knock in United’s 2-2 home draw to Burnley in midweek. Alexis Sanchez is also given a start after impressing against Arsenal in the FA cup last week.

Ander Herrera reclaims his place in midfield after a poor performance from Andreas Pereira against Burnley. The Spaniard has been excellent in recent weeks for Solskjaer’s side.

Follow the action from #LEIMUN in the #MUFC Official App 👇