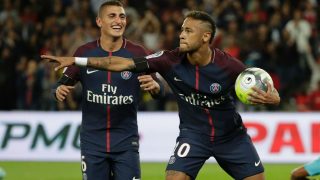 Paris Saint-German have been handed a boost ahead of their crucial Champions League encounter against Manchester United later this month, after it was reported that midfield star Marco Verratti could return to training this week.

That’s according to the Daily Mail, who claim the Italy international could return to first team training at some stage this week, and that he could now face United in a massive European clash on February 12th.

PSG will be without Neymar for both legs after the Brazil star suffered an injury to his foot last month, but Thomas Tuchel will at least have Verratti back to maintain the Ligue 1 side’s tempo in the middle of the pitch.

However, while this is a massive boost for PSG, it would be incorrect to label it a blow for the Reds.

Caretaker manager Ole Gunnar Solskjaer know what to expect from PSG, one of the most star-studded teams in Europe, and the minute United were drawn against them we knew it would be tough.

And, at this stage of the Champions League, you don’t progress without beating Europe’s best football teams.

Varratti is one of the best central midfielders in the world, and his presence in PSG’s midfield will make matters more difficult for Solskjaer’s men. He performed superbly against Liverpool in the group stages of the tournament this season.

United remain unbeaten under Solskjaer and the Norwegian will hope he can still say that once both legs against PSG are out the way – with United progressing into the next round!