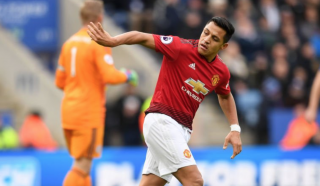 Nervy, hard fought, maybe on reflection not deserved, but a 9th win in 10 games won’t ever be sniffed at I’m sure. Plenty went right, but there was enough out there to leave fans with cause for concern in the future and a massive clue to the money men of where their pounds need to be spent in the summer. A small gap between United and Chelsea maintained and the ball in Arsenal’s court against City is all we could ask.

Here are the 3 (main) things we learned this afternoon, against Leicester.

It was there for all to see after the first 10 minutes. Leicester’s first attack of the game led to a comedy of errors on the edge of the box, and blushes were saved thanks to some last ditch defending from Luke Shaw. It was the theme of the day all told. United won the luck of the bounce on several occasions, they have the liberty of having the best keeper in the world to call upon and the opponents were wasteful, but were that against the likes of City or Liverpool then the score would’ve been very different. It’s quite the worry for fans and Solskjaer (or whomever it may be from next season) that even with the vast improvements to Victor Lindelof’s game he still isn’t the quality the side needs, and factor in the fact there isn’t a partner in the squad good enough to play alongside him and there are real issues. It seems that suitors have been sounded out, it wouldnt surprise me to see 2 or 3 through the door in the summer.

Herrera and Martial are key

Since his knock, Anthony Martial has been a notable absentee of United’s attack. It is no coincidence to me that when he came on this afternoon, there were more attacks than the rest of the second half totalled up. His new deal and dsome encouraging words from his manager should be enough to ensure he is a major part of United’s future, but to add more meat to that bone is the evidence at hand of just how much he is missed in the offensive trio. Another man who is due a new contract is Ander Herrera, and again he showed just what a player he can be for the side. His energy in the midfield was vital to the side as Nemanja Matic had one of his “less-than-good” performances in there. The running he brings is invaluable, and he can retain the ball as well as move it quickly. It was another inspired performance from the Spaniard and just another reason to love him.

Ah Alexis Sanchez, where do we begin? He was a genuine reason to get excited about on his signing this time last year, he’d been exceptional at Arsenal and City were beaten to his signing, it seemed a match made in heaven. Alas, it’s been downhill ever since. There was hope that a new manager and a system that would seem to suit his strengths might reignite the almost World Class talent we all saw in London, but today proved that he’s just not up to it any more. He was worse than a passenger today really, that is being quite kind, Sanchez was poor on and off the ball.