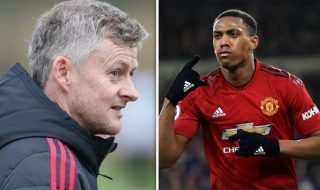 The eagerly awaited news of Anthony Martial signing a new deal at Manchester United came on Deadline Day, with the France international committing the next five-years of his career to the Old Trafford club.

A relief you could say as Martial’s future look uncertain not long ago but under caretaker manager Ole Gunnar Solskjaer, he has rediscovered his mojo and is back in the team on a regular basis.

However, Martial did miss the midweek meeting with Burnley which saw United come from a two-goal deficit to clinch a point. Elsewhere Chelsea got a 4-0 hammering against Burnley so the Reds didn’t lose any ground on the top four fight.

Solskjaer was asked about Martial’s new deal at Friday’s press conference. His quotes were taken from the Manchester Evening News.

“It’s a confirmation that we are happy, he’s had ups and downs. He’s been a top scorer, he’s been developing. As a young lad moving abroad it’s not easy but he knows he’s going to stay here for the coming future and I believe in him.”

When asked how good Martial can be, Solskajer added: “Very good. He’s a fantastic finisher, great ability, he’s young, he’s intelligent, knows he’s football. I’d like him to do a couple more runs in behind but I’ve not seen many players with the quick feet and the skills in the last third as he has, so we’re going to build his career and hopefully he’ll grab the chance with both feet.”

You’ve got to love how Solskjaer cuts the nice tone and immediately gets into where Martial can improve his game. There’s little time for admiring the work done to get the deal over the line, now we must work together ensuring his next five years at United is a period of domestic and maybe European success.

Footballers like Martial belong to the biggest stage and the 23-year-old knows United are trying to get back on track.

It was mentioned during the press conference that Martial has never got to 20 goals a season, however, Solskjaer believes he can change that.

“Yeah, he has the capability but as I said here I’d like him to make a few more runs in behind because he doesn’t miss chances. He’s a fantastic finisher, he needs to get more chances, you’ve got to read and sniff wherever there’s a chance, maybe some scruffy goals at times. Him and Marcus [Rashford] score loads of worldies goals but those tap-ins and making them runs could go a long way to do that.”

Then Solskjaer was asked whether Martial has the potential to become the best in the world like Ronaldo.

“Well of course that’s up to any player if you make a decision on how to develop your own career. Cristiano was the best, the way he’s changed to now, that’s part of any player you’ve got to model yourself on someone but you’ve got to have more challenges ahead of you and for Marcus and Anthony is to score more simple tap-ins.”

So, everyone is delighted with the news about Martial agreeing on a new deal. Losing a player of that ability would have been a blow, especially when United are looking to plan with the future and the French attacker very much fits the right profile of player to take develop and better the team.