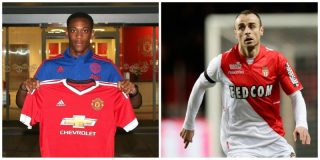 Paul Scholes has recalled what Dimitar Berbatov said about Anthony Martial after the pair played together at AS Monaco.

Most of us had not seen Martial in action before United spent an initial £36 million on a relatively unknown French kid, as reported by BBC Sport.

It didn’t take Martial long to make an impression either, with the winger marking his debut appearance against Liverpool with a breath-taking goal.

Martial excelled under Louis van Gaal before falling out of favour with José Mourinho, but under Ole Gunnar Solsksjaer, a more attack-minded coach, the France international is back to his very best.

Paul Scholes was speaking on BBC Radio 5 Live when he revealed how Dimitar Berbatov recognised Martial’s talent as a teenager.

“We all knew his qualities,” said Scholes, as quoted by the Daily Star.

“I remember speaking to Berbatov about him and he was absolutely raving about him.”

Berbatov spent one year at Monaco after leaving Fulham in 2014.

He now engages regularly with his Instagram following – letting us all know that he’s always rooting for United.

One of the calmest strikers I have seen play for United, Berbatov was always a pleasure to watch in a red shirt.