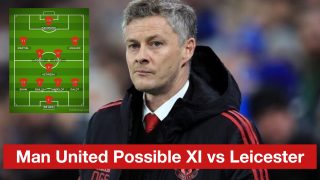 Ole Gunnar Solskjaer would have been relieved to know that Manchester United’s draw against Burnley, the first match of the nine under his tutelage that did not end in a win, somehow saw the Red Devils gain ground on the coveted top four. Of the famed big six sides in England, only North London rivals Arsenal and Tottenham won this week, and United gained on Chelsea and Manchester City, both of whom faced embarrassing defeats.

The upcoming two matches could be among the most important in United’s season because Manchester City will host both Arsenal and Chelsea in that timeframe. If City win both matches and United beat Leicester and Fulham, Solskjaer’s side will be in the Champions League places. These matches will also prepare United for difficult subsequent fixtures against Paris Saint-Germain, Chelsea and Liverpool.

Leicester City are no slouch of an opponent, as evidenced by their well-contested draw at Anfield on Wednesday. They have requisite quality in every position to contain and threaten even the best sides in the country, and in order for United to emerge from the King Power Stadium with three points, Solskjaer will have to rotate the squad expertly. A side resembling the one below is likely.

The Premier League’s leading and ever-present shot-stopper is as likely as anyone in the nation to be between the sticks this weekend.

It was time for Dalot to take Ashley Young’s place against Burnley, and it showed in the 33-year-old’s turgid display in both attack and defence. Expect Solskjaer to correct his error and award the Portuguese youngster with the place he deserves against Leicester.

Excellent defensively at the Emirates last week and showing improvements in his ball-playing, now could be the time for Bailly to prove that he is the future of United’s defence. He has dealt with Jamie Vardy expertly in the past and the same can be expected this weekend.

Lindelof provided the goods in every phase of play against Burnley, covering for the woes of the defenders around him, starting attacks with his composed and positive distribution, and scoring United’s dramatic equalizer in the 92nd minute. Given his form under Solskjaer, more of the same can be expected against Leicester.

Shaw restored his solid form against Burnley after a shaky performance against Arsenal and should be in line to start against Leicester given a dearth of alternative options in his position. Solskjaer implied that youngster Ethan Laird is likely to debut at fullback this season, but to throw him in against a side of Leicester’s quality would be cruel.

Nemanja Matic, whose importance to United cannot be overstated, needs a rest in order to keep progressing in the side. One may argue that this is an odd match to remove him for, but given the consecutive upcoming fixtures in which he will be needed, not only does he need a rest, Fred becomes more important if the Serb is forced to miss any key matches. A good performance from Fred could be continued into the Fulham match, too.

The disorganised and stop-start nature of United’s performance against Burnley was in no small part due to Herrera’s absence. The midfielder’s astute and brilliant understanding and awareness when pressing the ball is matched by his leadership and the organisation of the side around him. Masterminding a win without the integral Matic will require a masterclass from the Serb’s influential partner.

Saving a point against Burnley after a slick performance throughout, Pogba will again be important against a Leicester side against whom he has scored more than once since his return to Manchester United.

Emerging as one of the most important figures for Solskjaer, Lingard’s ability to glue the other big names in United’s attack permits a dangerous amount of freedom for the Red Devils. Resting him comes at a cost but has proven an effective method in allowing him to stretch his form across a prolonged period.

The inconsistency of Lukaku’s time under Solskjaer highlights a slight inability to get the best out of the Belgian striker, which will once again be attempted against Fulham. For now, though, Rashford needs to use this match to return to his stride and get back to his best after a frustrating display against Burnley.

Hopefully returning from injury this weekend, Martial will need a match to keep him ticking over for the same Champions League clash, and this seems the perfect opportunity. He will be responsible for keeping the excellent Ricardo Pereira busy in defence, limiting the potential for the Leicester right-back to hurt United in attack.