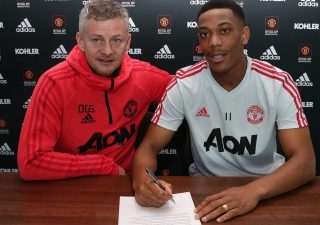 The new deal ensures that the Frenchman won’t be leaving Old Trafford anytime soon and at 23-years-old, United should get the best years of his playing career.

Martial looked like a player who wanted to leave United in the summer. His agent confirmed as much in June, as per the Guardian, but perhaps the change in management last month forced Martial into making a U-turn on his future?

The France international did not have the best relationship with former manager José Mourinho but under interim boss Ole Gunnar Solskjaer he’s back to his best.

He now plays regular football with the freedom that he have craved for in a United shirt. Martial has 8 goals to his name this season, as per WhoScored, and is sure to add to that tally between now and the end of the season.

The likes of Martial, Marcus Rashford and Romelu Lukaku should all be hitting double figures each season easily. That should even be expected of Alexis Sanchez if he gets enough minutes on the pitch, which he will between now and the end of the season.

After signing his new five-year deal, Martial took to Instagram to post a photo of himself and Solskjaer, along with a classy caption, in which he labels United the best club in the world.

Martial wrote: “Happy to continue playing for many years in the best club in the world @manchesterunited.”

The world is at his feet and now – after signing a long-term deal – it’s up to Martial to develop his game and reach his full potential. Hard work is required if he wishes to win Premier League titles over the next five years!