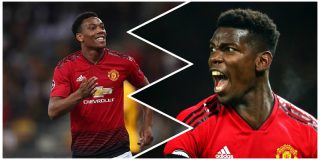 Paul Pogba limped out of Old Trafford on Tuesday night following the 2-2 draw with Burnley and Anthony Martial missed the match due to picking up a knock in training prior to the game.

Solskjaer dismissed claims Pogba picked up a serious knock and thinks he will be fit enough to face the Foxes, although there were reports during the week that he underwent a scan on his thigh, as per The Sun.

Martial, on the other hand, will do some fitness work with the view of being involved.

“We’ve not had a proper session since the game so hopefully both of them can get through that,” Solskjaer is quoted by the Manchester Evening News.

“I don’t think there’s anything with Paul.

“Anthony will do some rehab work. I would imagine him to be involved, he seemed happy yesterday.”

It’s a major boost to have both players available for Sunday, especially given how both Frenchmen have provided match-winning moments since Solskjaer’s arrival.

Martial signed a five-year deal with Manchester United on Thursday, with the option to extend that by an extra year.

That keeps the France international at Old Trafford until 2024, and The Sun claims Pogba is also looking to sign a new deal.

Both players faced uncertain futures after becoming unhappy with former manager José Mourinho, but a lot has changed over the past month under Solskjaer and it reflects well on the pitch.

Solskjaer noted in his press conference that Marcos Rojo is the only player ruled out long-term.

When asked about the squad, Solskjaer said: “It’s very equipped, we’ve had now six weeks together, found out what strengths weaknesses we’ve got, we’ve risen to most of the challenges.

“Maybe the setback of the Burnley goals we conceded, make us move to the next level because we’ve given ourselves a chance now to get into the top four earlier than we thought but there’s not too many games, tough opposition, we start with this game against Liverpool, Fulham away as well and then the three big ones with PSG, Liverpool and Chelsea, Palace away. It’s a tough month but we’re ready. I’ve got a big squad, it’s only Marcos Rojo now who’s out for a period.”