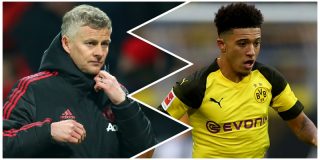 The Metro claims the Reds are keeping tabs on the £90 million-rated Borussia Dortmund star and could take the former City youngster back to Manchester in the summer.

Sancho, 18, left City in 2017 to go in search of regular first-team football after rejecting a new offer at the Etihad.

READ MORE: Antonio Valencia to leave Man Utd after 10-years worth of service

He took a risk by leaving his homeland and moving to a different league; something Sancho is likely to reflect on in his later years as a risk worth taking.

Impressive displays in the Bundesliga led to Sancho earning an England call-up last year and now Old Trafford chiefs could look to bringing him back to England.

The Mirror adds that United have already consulted caretaker manager Ole Gunnar Solskjaer about the current squad, with the Norwegian identifying the right flank as an area in need of investment.

Sancho has managed to score 6 goals and create 9 assists in the Bundesliga this season, as per WhoScored. While that form doesn’t justify the £90m valuation being touted, it does show incredible promise for a player his age.

Anthony Martial attacking with pace from the left cannot be replicated on the opposite flank with the personnel available to Solskjaer, unless he decided to take Marcus Rashford out of his central role but the England international has rarely performed on the right. He’s better from the left or as a centre-forward.

Dortmund have already conceded that American starlet Christian Pulisic will leave the club at the end of the season after agreeing to sign for Chelsea, so they’ll demand a premium price for Sancho to ensure funding is available to find another young exciting winger.

Meanwhile, it’s worth keeping in mind that City have a buy-back clause on the winger meaning they can match any bid that the Bundesliga side accept for the 18-year-old.

United currently have Jesse Lingard, Alexis Sanchez, Juan Mata and Romelu Lukaku to play on the right, but none of those are specialists in that role, and United need to balance their attack to ensure they hit teams on the right like they do on the left.

Blistering with pace and conviction.

Former manager José Mourinho made it no secret he wanted to sign Chelsea winger Willian during his time at Old Trafford, though a deal never materialised and he remains at Stamford Bridge.