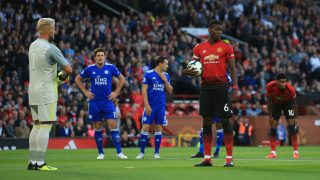 Ole Gunnar Solskjaer will look to bounce back from Tuesday night’s 2-2 draw with Burnley by taking all three points from Leicester City on Sunday.

Drawing with the Clarets saw an end to Solskjaer’s perfect start as interim boss but the Reds have a chance to make amends this weekend at Leicester.

United were just minutes away from a shock defeat against Sean Dyche’s men during the week, though two late goals from Paul Pogba and Victor Lindelof recused a point for the Reds. While Arsenal won against Cardiff, Chelsea suffered a 4-0 hammering at the hands of Bournemouth so it could have been worse on United, who are now just two points off fourth spot, currently occupied by Arsenal on goal difference.

It could swing in our favour again this weekend as Manchester City host Arsenal on Sunday evening before taking on Chelsea next week. Pep Guardiola’s men need to get their act together if they’ve any chance of catching Liverpool at the top of the Premier League.

Back to United, Solskjaer claimed after the match that he and Mike Phelan learned something new about the players during their comeback from a two-goal deficit. They should character by not giving up after conceding twice against the run of play.

Anthony Martial missed the game against Burnley with a knock but after signing a new five-year deal at Old Trafford, everyone hopes he will return in time to run the Foxes ragged.

Chris Smalling should be available again, although we’ve opted for Eric Bailly to start alongside Victor Lindelof in our predicted line-up feature. It’s good to have more personnel available defensive but United’s options are weak most of the time.

Andreas Pereira really struggled against Burnley, so you can expect to see Ander Herrera return to the side after his impressive form of late. Fred could also be in contention but perhaps not days after dropping points against lesser opposition.

United have faced Leicester 25 times in the Premier League, winning 16 of those encounters and losing just two. The Reds also won 2-1 in their previous meeting against the Foxes and Sunday’s plan is to do the double over Puel’s side.

Granted Martial is back fit, United can revert to quick counter-attacking football with Jesse Lingard on the opposite flank. Solskjaer will hope Leicester leave space at the back to exploit with Marcus Rashford in the form of his life.

But Claude Puel’s Foxes weren’t afraid to attack league leaders Liverpool during the week, managing to secure a 1-1 draw thanks to a Harry Maguire equaliser. They could do the same against United so we must be more clinical than we were against the Clarets.

The match is part of Sky Sports’ Super Sunday action, therefore, will be available on Sky Sports’ Premier League and Main Event channels. Sky Sports subscribers can stream the match live via SkyGo.