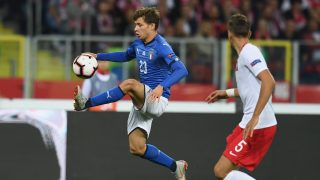 While Manchester United’s frenetic 2-2 draw against Burnley did say a lot about the side’s tenacity to pull games back from losing positions and the hunger in the players to not give up, it also hinted at another vital aspect.

Andreas Pereira was handed a start about a day after Ole Solskjaer praised the midfielder for how good he can be. But the performance turned out to be a very sub-par one from the 23-year-old. He lost the ball about 14 times and got physically overpowered by a Clarets side that very expectedly relied on brute force a lot of times. Pereira struggled to get control of the game and unlike how the pre-season had gone, games seemed to pass the former PSV man by.

And United seemed to miss Ander Herrera every time Pereira was caught napping. The Spaniard’s no-nonsense and dogged approach to cripple the opposition and the lion-like resiliency seemed to be missing from the Red Devils’ midfield. While Solskjaer has to take a share of blame for rotating the side too much from the win over Arsenal in the FA Cup, but it again props up question marks about Pereira’s long term future at the club.

On the same side of the argument lies Nicolo Barella: the man who has already garnered interest from Chelsea and Inter Milan, with a host of other Italian sides also interested in the 21-year-old’s possible signature.

While Pereira won’t be isolated or guillotined straight away, a lot of times this season he has given the impression that he isn’t good enough for United. Even against Reading in the FA Cup, Pereira couldn’t get a foothold in the game when Fred did relatively better against the Royals. The disaster against Brighton away from home broke his confidence and he hasn’t recovered from that at all.

What Barella brings to the table, isn’t just what Pereira is expected to bring when he is playing well. But the Italian has in himself a lot of what Herrera has always been. While Barella is more Herrera than Pereira, but he is technically better than the Spaniard and more of a ground-covering player and a more mobile player than the Brazilian-Belgian.

He has the engine to cover every blade of grass on the pitch and he looks to spark attacks for Cagliari every time he gets on the ball. The way Leonardo Pavoletti and Joao Pedro play is also down to how hard Barella works behind them. He wins the ball back in the heart of the park like Herrera does circulates it forward very well the way Pereira does. Not just that, he likes to dribble it towards the opposition defences and his diminutive figure helps him in that aspect.

Barella has won as many as 3.2 tackles per game this season- the fourth best in the Serie A and behind only Allan, Lucas Leiva and Valon Behrami. And all these three players are around the 30 age mark. Barella is about 9 or 10 years younger to them.

While questions can be asked about why Fred is there and how would Barella do a job if he’s there. But the difference lies in the fact that they can play together, as United’s second choice midfield players in front of the holding midfielder. Barella thrives on doing the dirty work that Herrera likes to do and Fred likes the attacking freedom to venture forward. Barella can soak up all the aggression oozing from the opposition to help Fred make in-roads forward.

There is a reason why Barella is often compared to Radja Nainggolan, who is also a former Cagliari player before he joined Roma and subsequently moved to Inter last summer. Bar the sometimes over-flamboyant lifestyle, Barella and Nainggolan are very much alike. They certainly love a dirty battle in midfield and increase in confidence every time they get in them. While Nainggolan’s attacking nous came about during the later years of his Roma career, Barella’s attacking abilities are already out in the open.

He is more box to box than Nainggolan was before he was used as an attacking midfielder by Eusebio di Francesco. He is more like a very younger version of what Herrera himself was at Athletic Bilbao under Marcelo Bielsa and how he was under Louis van Gaal a lot of times. He’s a proper fighter.

It’s crucial to know that he isn’t a finished product yet, but it is also vital to note that he will soon be a regular for Italy under Roberto Mancini’s new-look Azzurri side. And he could well be the driving force for them the way he was in one of the games against Ukraine. 3-years down the line, he won’t just be playing at a powerhouse club. He will be the one who sparks their attack and defuses dangers in midfield.

With Marouane Fellaini leaving and a midfield spot empty, Barella is the man United need more than anyone else in the world if Andreas Pereira keeps of disappointing with all the chances he gets. Being a young player, he will love to play under Solskjaer and if used in the way Herrera is these days, he’d love to play for Manchester United.