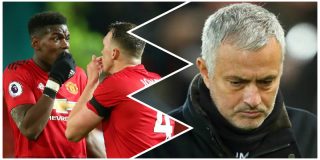 Paul Pogba has turned into a leader at Manchester United since José Mourinho’s sacking, according to a report in The Sun.

The past month has seen Pogba play some of his best games in a United shirt and caretaker manager Ole Gunnar Solskjaer is being credited for making that difference.

Everyone seems happier at United than they did all season and the results have picked up dramatically, with Pogba playing a key role as a driving force for creativity in midfield.

Pogba’s future became uncertain under Mourinho with the pair not quite seeing eye-to-eye. The former United manager stripped the World Cup-winner of captaincy duties earlier this season, but Pogba appears to have rediscovered his mojo in the dressing room.

The Sun even claims Pogba was the catalyst for leading the players to the 3-1 win over Arsenal in the FA Cup last week.

On Tuesday night, Pogba inspired a United comeback by scoring from a penalty against Burnley. The Reds were trailing the Clarets by two-goals before the Frenchman and Victor Lindelof rescued a valuable point in the race for a top four finish.

A Manchester United insider reportedly told The Sun: “The dressing room after the win at Arsenal was the best it has been for a couple of seasons now.

“There was loads of high-fives and hugging among the squad and backroom. It was all about the manner of the performance.

“They carried out Ole’s instructions to the letter. Pogba went about to everyone bigging and jeeing them up. It was brilliant to see.

“Ole was beaming from ear-to-ear but he was much more laid back. It was Pogba leading the dressing room and although he isn’t captain, it felt like he was.”

Meanwhile, a separate report from The Sun claims Pogba wants a new contract at United, suggesting there has been a massive U-turn in recent months when there was speculation over him leaving the club.