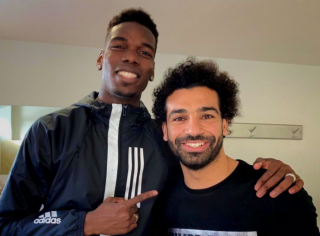 Paul Pogba and Mohamed Salah are both stars for England’s two biggest clubs but the pair put the rivalry between Manchester United and Liverpool to one side on Thursday.

The duo were together at a shoot for adidas and Pogba shared a picture of them together on Twitter.

‘Plotting with the King of Egypt,’ Pogba captioned the post.

Salah’s Liverpool dropped points from their Premier League meeting with Leicester City on Wednesday night, but still sit 5 points clear on top of the league.

The Scousers increased their lead in the title race after Manchester City were beaten 2-1 by Rafa Benitez’s Newcastle side midweek.

Pogba, meanwhile, has been enjoying better form since Ole Gunnar Solskjaer replaced José Mourinho as United manager a month ago.

Posing for pictures with Liverpool players is not be a popular thing to do, but can you imagine the uproar had Pogba posted this a month ago when he wasn’t performing at his best?

All that matters is beating Liverpool when we play them at the end of February to try put a stop to their title charge. The table could look very different then, especially with the Reds pushing for a top four finish.