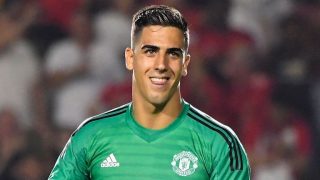 Manchester United are expected to send goalkeeper Joel Pereira on loan to Belgian side K.V. Kortrijk on deadline day, as reported by the Manchester Evening News.

The 22-year-old, who spent the first half of the season on loan in Portugal with Vitoria Setubal, is fourth in the pecking order at United, behind first choice David de Gea, Sergio Romero and the experienced Lee Grant.

It’s difficult to work out why Pereira was recalled as someone who doesn’t pay much attention to Portuguese football, though you would wonder if it had anything to do with game time? United would have been right to take him back from Vitoria Setubal if he wasn’t playing regularly.

Pereira, a Portugal U21 international, has tons of potential and needs to be playing regular football in order to develop into a better shot-stopper. Despite only return from a loan spell, he’s about to head out on another which will hopefully be beneficial to him.

Former United boss José Mourinho was a fan of Pereira and said the keeper had the potential to become ‘the Portuguese goalkeeper of the next generation’, as per The Metro, though he’s only made three senior appearances for the Reds.

It’s rarely been this difficult for a keeper to break into the United team. De Gea is very much an immovable object from the starting line-up, with chances few and far in between for back-up option Romero.

De Gea has a contract on the table to sign if he plans to remain at Old Trafford for the long-term future. The Mirror suggested on Wednesday that a deal is likely to be struck at the end of the season.

This Manchester United goalkeeper is on his way to Belgium. After his loan with Vitória got cut short, Joel Pereira (22) is on the verge of joining Belgian side KV Kortrijk on loan. #mufc pic.twitter.com/gUHkBsb4C6