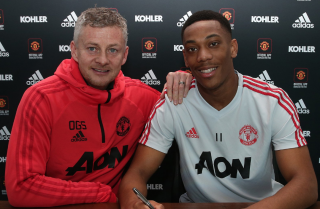 We do not expect any arrivals at Old Trafford this Deadline Day, but Manchester United have put pen to paper with one of their biggest stars.

Just a few months ago many United fans became resigned to the inevitability of Anthony Martial leaving the club. It was clear he wasn’t happy playing under former manager José Mourinho, who had considered selling the Frenchman in the summer, as reported by The Guardian at the time.

It goes without saying that United made the right decision by keeping Martial and working on a new deal with the attacker. He has been exceptional under caretaker manager Ole Gunnar Solskjaer with happiness flooding through the camp on the back of brilliant results.

Blessed with mercurial talent, United have successfully tied down one of the most exciting footballers in European football on a five-year deal, as reported by Sky Sports. There is also an option to extend the deal by a further year.

Martial said: “I am loving my time at this club. From the day I joined I have been made feel part of the United family and I have been incredibly humbled and overwhelmed by the warmth and love of our fans, who continue to amaze me with their support.

“I would like to thank Ole and his coaching staff for their belief in me and for helping me to take my game to the next level.

“This club is all about winning trophies and I am sure the next piece of silverware is not that far away.”

Solskjaer added: “Anthony is one of those naturally gifted players that any coach would love to work with. For a young man, he has a good footballing brain which, when coupled with his exceptional talent, makes for a player with an exciting future ahead of him. This is the perfect club for Anthony to progress his development as a top-class forward and we are all delighted he has signed a long-term deal.”

Ciaran Kelly from the Manchester Evening News nails it with a tweet on how United are finally heading in the right direction.

United dispensing with one player, Marouane Fellaini, who does not suit the club's traditional style of play and tying down another, Anthony Martial, who embodies it. Significant shift since summer when things were very different. #mufc