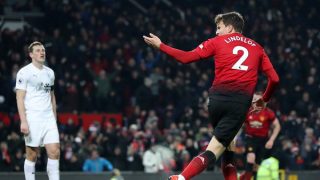 Manchester United centre-back Victor Lindelof has taken to social media this morning to reveal he is still unhappy in the wake of last night’s 2-2 comeback against Burnley.

It was a sluggish display by the Reds against a bunch of relegation contenders, although take nothing away from Burnley who were organised defensively throughout the game.

United fell two goals behind at Old Trafford but fought back to earn a point, with two goals after the 87th minute.

Paul Pogba scored from the spot while Lindelof netted his first United goal to equalise in stoppage time.

He revealed on Twitter he was proud of scoring his first for the club, but is still mad about the result.

The Sweden international wrote: “Still mad about last night. Proud to have got my first goal for the club.”

It’s always great to see a player get off the mark and Lindelof has been performing tremendously of late. The club must now work towards identifying a dominant defender to partner him at centre-back for next season and beyond, with Phil Jones called upon in recent weeks and not quite cutting the mustard…

But all Lindelof needs to do is continue what he’s doing and remain a regular in the team. United have been guilty of chopping and changing too much at the back, and that doesn’t help when we’ve conceded far too many goals this season.

Still mad about last night. Proud to have got my first goal for the club 🙌🏼 #MUFC pic.twitter.com/bxAG5GHiR8