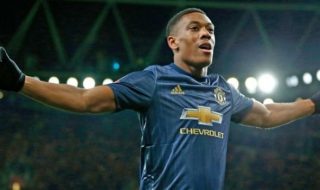 Manchester United saw their winning streak under caretaker manager Ole Gunnar Solskjaer come to an end on Tuesday night when a Premier League meeting with Burnley finished as a 2-2 draw.

The Reds didn’t deserve to lose the game but had to come from a 2-goal deficit to earn a point.

Only themselves to blame, United create enough chances to put the game away but were lacking that cutting edge.

Solskjaer did make changes to his side that knocked Arsenal out of the FA Cup last Friday but some he has was forced to make, like Anthony Martial who dropped out of squad after picking up an injury in training.

The boss hopes his star man on the left flank can return in time for Leicester City on Sunday.

“He [Martial] got a slight injury in training but hopefully he’ll be back for next weekend,” said Solskjaer on MUTV. “But there was no chance he could play today so it was easy enough to put Romelu [Lukaku] on the pitch.”

When Solskjaer got the interim position he made it clear players would be given chances in the first team, and last night saw Andreas Pereira start in midfield ahead of Ander Herrera. The Brazilian put in a poor display as he continues to struggle in the Premier League, with his future very much in the air and a contract set to expire.

United could have also done with Martial last night. His substitute performance was key against Arsenal at the Emirates, though he’d have started last night had he been fit.