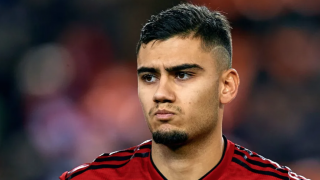 Manchester United caretaker manager Ole Gunnar Solskjaer has refused to attack Andreas Pereira for his mistake during the 2-2 draw with Burnley.

The Norwegian coach instead opted to offer support to the Brazilian international, who he gave a chance to by starting in midfield alongside Nemanja Matic and Paul Pogba.

It wasn’t a night to remember for Pereira, who lost possession deep in his own half to allow Burnley open the scoring.

He hasn’t featured a lot this season and has struggled whenever given a chance in the Premier League.

Pereira slipped on another occasion but was thankfully bailed out by his teammates. His unhappiness was clear when substituted by Solskjaer, though the caretaker manager was only thinking about rescuing the match with United trailing.

Uncertainty surrounds Pereira’s future with his contract expiring in the summer and little talk over a new deal.

Ole: “Andreas will be better off for having this experience, no problem about that.” #mufc [MUTV]

Do you think Andreas Pereira is good enough for United? Tweet us @StrettyNews.