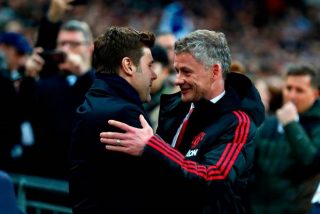 The Norwegian has done such a good job over the past month people are now considering him for the full-time gig, despite Mauricio Pochettino emerging as a front runner shortly after José Mourinho was sacked on December 18.

Prior to last night’s draw, Solskjaer’s United had beaten Cardiff, Huddersfield, Bournemouth, Newcastle, Reading, Tottenham, Brighton and Arsenal across all competitions. In the Champions League, however, United face a challenge after being drawn against Ligue 1 giants Paris Saint-Germain in the last 16.

READ MORE: Solskjaer: Man Utd didn’t deserve to loose against Burnley, despite being too slow

But despite Solskjaer’s incredible work of late, The Express states Ed Woodward dreams of appointing Pochettino as the full-time successor to Mourinho.

The Tottenham boss is held responsible for transforming the London club by overtaking Arsenal in the league most seasons and regularly qualifying for the Champions League, although he has yet to win a piece of silverware.

But journalist Duncan Castles has claimed Pochettino sees his chances of landing the United gig diminishing due to Solskjaer’s impressive start.

He also believes the Argentine coach is ‘positioning himself’ to tale ober at United.

Speaking to the Transfer Window podcast, Castles said: “There’s a lot of positioning of himself, here.

“I think he must be conscious that the opportunity to go to Manchester United is diminishing with [Ole Gunnar] Solskjaer’s results [at United].

“You can play them off against each other.

“But what’s certain is that the situation at Tottenham is becoming more fragile by the week.

“Not only because of these exits from the cup, but also because he’s got problems that are matters of injury, missing key players from his team, he knows the squad is tired because he’s had to use that core group that he trusts too much early in the season.

“They’ve come into this season off, for a lot of them, a long World Cup campaign which is something that is generally a problem for players.

“His managerial coaching style has always been to train the players hard through the course of the season, so he’s had difficult climaxes to seasons off the back of that.

“When you see performances dropping off already then it’s kind of the opposite of the Solskjaer situation.”

United’s interest in Pochettino has been long known.

Most were utterly convinced he was the right man for the job before Solskjaer came in and left his mark. Now, the job is very much up for grabs, with both managers auditioning for the role.

Spurs are going through a blip after being knocked out of both League Cup and the FA Cup last week.

Solskjaer’s United booked their place in the fifth round of the cup, where they face Chelsea away at Stamford Bridge.

It will be intriguing to see who lands the job.

Tottenham host Watford at Wembley this evening in the Premier League. Kick-off: 8pm.