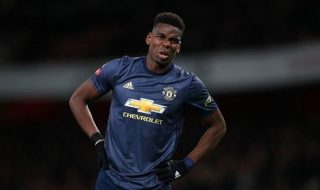 Manchester United face uncertainty on the fitness of Paul Pogba after the French midfielder was spotted limping after Tuesday night’s draw with Burnley.

Pogba played a key role in driving United through a difficult night at Old Trafford, with his 88th minute goal from the penalty spot starting the comeback from a two-goal deficit.

United won the penalty after substitute Jesse Lingard was fouled in the box.

Victor Lindelof recused the point in injury time as the team failed to win for the first time under caretaker manager Ole Gunnar Solskjaer, who will learn more about his player’s character for not giving up despite trailing 2-0 after dominating the game.

The Reds hope to return to winning ways when they travel to Leicester on Sunday but it remains to be seen whether Pogba will be fit for the game after limping through the mixed zone last night, as reported by the Manchester Evening News.

The France international was seen limping on the pitch before scoring his goal but played through the pain as United tried to score a late winner in stoppage time.

But sadly there was no fairytale ending for Solskjaer. He will still be satisfied that his players came from behind with that never said die mantra, though the interim boss will need Pogba available for Sunday when we aim to bounce back with three points.

More news on Pogba when we have it…