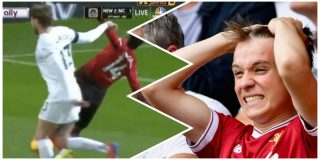 Manchester United came from behind to draw 2-2 against Burnley on Tuesday night in the Premier League.

The Reds were two goals down in the 86th minute a stoppage equaliser rescued a point for Ole Gunnar Solskjaer’s men.

United’s comeback was driven by Paul Pogba and Victor Lindelof, with the Swede scoring his first goal for the club. Pogba netted his penalty prior to that in the 87th minute, so the Reds left it late to turn things around somewhat in their favour.

But did Jesse Lingard dive to win the penalty?

The penalty was given but not without controversy.

Lingard is being accused of going down too easily following minimal contact from Jeff Henrick in the Burnley penalty area.

Hendrick doesn’t help matters by positioning himself terribly before trying to defend Lingard.

The replays show Lingard received contact on his shoulder but Liverpool fans are angered suggesting he crashed to the ground theatrically.

Why does last night’s game concern them, you might be thinking? A good question when you consider Manchester City were beaten by Newcastle, throwing up a truly awful defence of their title, and rather than complaining about Lingard they should be buzzing with potentially increasing the gap at the top of the table tonight.

The Scousers are still butt-hurt with the coverage of Mohamed Salah’s constant diving.

Wonder if Richard Keys will bush Lingard for diving. Probably not cuz he doesnt play for Liverpool and his name isnt Salah pic.twitter.com/Se3tnsUfMg

Lingard diving but he’s not Mohamed Salah so its all good. #MUNBUR #LFCpic.twitter.com/R8FmWuTpdv

There’s no way that causes Lingard to fall like that. Embarrassing. #twitterclarets pic.twitter.com/J5FhAMsqKM

The Lingard penalty. Given that it is a softer penalty that the one Salah got vilified for against Newcastle, I’m looking forward to the week long replays of it on @SkySports and debate from “experts” as to whether Lingard is damaging his reputation with those kind of antics…