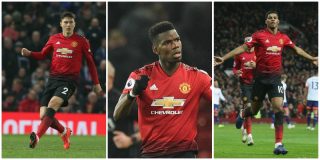 The voting has opened for Manchester United’s January POTM and in the running is Victor Lindelof, Paul Pogba and Marcus Rashford.

We can have no arguments about the trio picked; all have performed out of their skins under Ole Gunnar Solskjaer due to being allowed to express their attacking qualities.

You could include Anthony Martial if there was a fourth space…

Lindelof would be my pick of the lot after another assured month of performances, scoring his first goal for the club in a dramatic 2-2 comeback against Burnley.

Pogba returned to being the Rolls Royce we know we can be, partly to do with being happier under the new boss.

He’s a winner and could be an important part of our midfield for years to come in the right hands. You can tell this feels like home, the one he left for Turin.

The France international scored 2 goals for United in January.

January’s top scorer (3) has been at his best yet. Rashford runs tirelessly at defenders with conviction and has looked better in front of goal, even if Tuesday night’s meeting with Burnley would suggest the opposite.