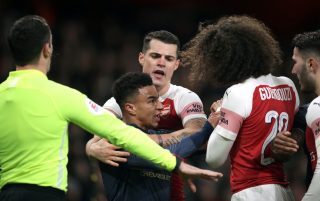 The FA have opened an investigation into Manchester United’s FA Cup tie with Arsenal after it was claimed a coin had been thrown at Jesse Lingard.

Lingard found himself involved in a tussle near the corner flag after an altercation on the pitch featuring teammate Marcus Rashford.

But after doubling United’s lead in the first-half, Arsenal fans were quick to abuse the England international.

Now it is being claimed that a coin was thrown in his direction.

Stupid behaviour and hopefully, if they find adequate evidence, the thrower is identified and handed a hefty slap on the wrist.

Lingard was one of the better performers at the Emirates last Friday and his goal was quickly followed by a Michael Jackson inspired moonwalk celebration. No doubt that added fuel to the fire for the Arsenal supporters but that doesn’t make it okay to throw a coin at someone.

Sky Sports tweeted the news this morning, as seen below:

BREAKING: The FA are investigating after a coin appeared to be thrown at Jesse Lingard during Man United's FA Cup win at Arsenal last Friday. #SSN pic.twitter.com/3quO3kuHao