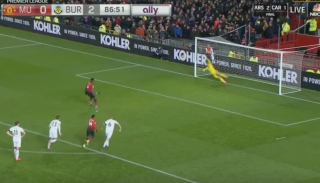 Paul Pogba scored from the spot to hand Manchester United a lifeline against Burnley in their Premier League meeting.

A slow run up followed by a sweet strike saw the French convert his spot-kick to give United a goal.

The scoreline, currently 2-1 in Burnley’s favour, reflects poorly on the Reds.

Ole Gunnar Solskjaer is still in line for his first defeat as United boss, unless his players can pull this one out of the fire.

Time is running out and United have not been very convicting in the final third.

After going two goals behind, we’d happily take a draw at this stage.