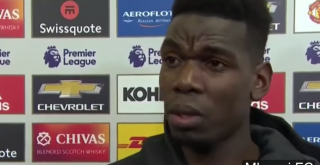 Paul Pogba spoke to the press after helping Manchester United come from behind in Tuesday night’s 2-2 draw with Burnley at Old Trafford.

The Frenchman along with defender Victor Lindelof carried United from behind through a difficult night.

Burnley may be relegation contenders for now, but they were well organised and put up a good fight to make matters uncomfortable for the dominant home side.

READ MORE: Solskjaer: Man Utd didn’t deserve to loose against Burnley, despite being too slow

United had all the possession but just couldn’t find a way through Sean Dyche’s defence for the most part.

Caretaker manager Ole Gunnar Solskjaer saw his perfect start come to an end as his players left it late to come from a two-goal deficit, with Pogba scoring from the penalty spot and Lindelof equalising in the final minutes.

Pogba revealed after the match that Solskjaer told the players to be humble after away wins over Tottenham Hotspur and Arsenal.

However, complacency was not the issue tonight. It was one of those frustrating games that saw endless chances wasted. We created enough to wrap up the game before conceding both goals.

Pogba says they must learn from their mistakes and start the next game differently.

He admits we should have started the game better and with more aggression, while noting it was two points dropped rather than one saved.

Pogba:”After winning Arsenal and Tottenham, Ole told us to be humble” (post Burnley interview) from r/reddevils