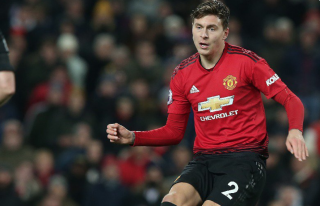 The goalkeeper was left helpless for Burnley’s two strikes, both of which flew into his net in incredible fashion.

It remains bizarre to me that Young starts every match despite clearly not being the long-term solution to United’s right-back woes. He was nothing but frustrating today, losing many duels including yet another back-post header for the second goal. His aimless ball at the end, the only completed cross of his thirteen efforts according to WhoScored, was turned into United’s equaliser by Alexis Sanchez. It will be on Solskjaer if Diogo Dalot doesn’t start instead this weekend.

Lindelof was tasked with covering for a remarkable number of poor performers around him and did superbly throughout despite breaking United’s offside trap for the second goal. His distribution of the ball covered wonderfully for Nemanja Matic’s lethargy and an important goal was the deserved outcome of his performance.

After Eric Bailly’s performance on Friday, it came as a shock that Jones was returned to the side for tonight’s match, and the reasons for which the Ivorian needs to start on the weekend were made clear here. Like Young, he lacks consistency for a Champions League defender and with just a month before his 27th birthday, it is truly time to move on.

After a difficult night against Pierre-Emerick Aubameyang in the FA Cup, Shaw returned to a better version of himself against Burnley. While he still did not show the potential he has, he often played fine passes, had a clear objective with his crossing, and proved that he remains United’s best fullback.

Whether Matic is to blame for his lethargic, poor display at the heart of midfield is unclear, because it can be attributed to a lot of factors. The absence of Ander Herrera and the struggles of the Spaniard’s deputy, Andreas Pereira, likely played a part, but the more likely cause is the fact that he has played far too many matches and there are no proven alternatives to the Serb. Nonetheless, he had enough promising moments over the course of the 90 to prove that this isn’t a crisis.

At one point in the first half, it seemed the Brazilian academy graduate was growing into the match, spraying passes and becoming increasingly influential in the final third. That promise reverted to the scatterbrained nature in which he started the match, as he seemed unable to win any duels, completed fewer defensive interventions than he committed fouls according to WhoScored, and was left as helpless as he was as he made a crucial error for Burnley’s opener.

The Frenchman produced a crucial penalty to help secure a result for United, and his fine play in tight spaces and tendency to create excellent chances was again on display today. My sole concern regarding Pogba today is that the ball wasn’t being given to him more often in the second half, and that the likes of Young are taking set-pieces over a clear game-changer who excels in important moments.

Mata’s neat, effective play in the final third created opportunities for himself and United’s other forwards, but again from out wide and even when he moved into Pereira’s deep central midfield role late in the match, he failed to be a key influence. His quality is as clear as his place in this team is unclear.

It is difficult to assess Lukaku’s performance because, as a goal-scorer, he didn’t have many chances to exercise his true abilities. The fairest assessment would be that his occasional creation of great chances, such as Rashford’s abhorrent miss, were equally weighed with the little he offered in open play throughout the match.

Emerging as a key figure over recent weeks, Rashford has been rewarded accordingly, but that type of responsibility is also accountability for poor performances. The Englishman was all over the place today, completely fluffing his lines on a clear open goal early in the match and being wasteful with his chances throughout, and with a clear lack of effort to adapt to playing alongside another striker as Lukaku did for him.

Watching the performances of Lukaku and Rashford, there is a fair claim that Alexis Sanchez should start against Leicester this weekend providing Anthony Martial returns from injury to join him. The Chilean was constantly involved, a nuisance to the opposition defence and unafraid to capitalize upon scrappy opportunities.

Lingard seemed anonymous throughout his substitute cameo until doing excellently to win the penalty which Pogba buried. His movement between the lines and selflessness was missed today as Rashford and Lukaku looked disjointed.