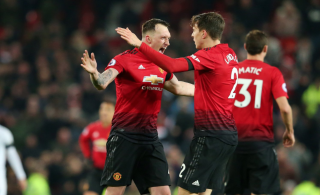 Ole Gunnar Solskjaer lost his perfect start at Manchester United but his unbeaten record remains intact after a late double salvo from Paul Pogba and the unlikely source of Victor Lindelof. Just as they were in this fixture last season, United had to come from 0-2 down again. Here are four things we learned from the tie.

On his first league start under Ole Gunnar Solskjaer in the absence of Anthony Martial – and with Ander Herrera surprisingly dropped – the Brazilian failed to take his chance. He was disappointing against Reading in the Cup and underwhelmed again here. Hyped up as an exciting young prospect when he first broke through, it all seems much ado about nothing as far as Pereira is concerned. He doesn’t look up to standard and was at fault for Ashley Barnes opener. United improved when he went off.

First bump in the road for Ole’s United

It had to happen at some point, but few would have predicted Ole’s first dropped points to come against a struggling but improving Burnley side. After a flawless first month at the wheel, and after recent wins at Tottenham and Arsenal, this proved a nasty and unexpected reality check for Solskjaer’s side. However, kudos to the boys for their courage and spirit, it could have been a lot worse and the team showed character to snatch a point from the jaws of defeat. Solskjaer knows a thing or two about late goals. This was a reminder that it won’t be plain sailing ever week, but United’s powers of recovery are as strong as ever – in Ole time!

Speaking of which, there is something very curious in the air when United’s east Lancashire neighbours come to town. Tom Heaton turns into Teflon whenever he comes up against us. I had the nagging feeling all day that United would come unstuck, and so it proved. For the second season in a row, Dyche’s stubborn and resilient men held a 2-0 lead at Old Trafford against the odds. For the second consecutive season, a late United equaliser salvaged a point that will feel like a defeat for the Clarets. Jesse Lingard last time, Victor Lindelof 13 months on. This was the third successive draw at Old Trafford between the two Lancashire rivals since Burnley’s promotion back to the Premier League. They again proved a tough nut to crack and belied their lowly status with a typical performance of doggedness and determination.

A frantic and frenetic finale to a Premier League thriller, in which United diced with death but survived… just! The winning run ends, but Solskjaer becomes the first – and only – manager in Premier League history to not lose his first seven games in charge of a club.