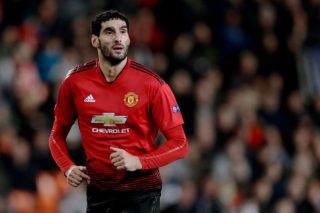 Sky Sports broke the news earlier via their Transfer Centre that an unnamed Chinese club was in talks with Manchester United over signing midfielder Marouane Fellaini.

Now Spanish journalist Guillem Balague claims a deal has been struck and Fellaini will now move to China before the January transfer window shuts.

He tweeted the news just hours Sky Sports claimed talks were underway between United and one Asian club.

Just been told Fellaini to China is all done and dusted. He will get €11m annual net. Transfer fee is £7m #MUFC pic.twitter.com/NWrcaNeMnQ

This would suggest Fellaini’s five-and-a-half-year stint at Old Trafford is coming and end.

A player not being good enough doesn’t mean we can’t give him a decent send off or appreciation post. Fellaini always gave 100 per cent, even when others didn’t and for that, he should be remembered somewhat fondly.

All the best (if there’s any truth in this)…