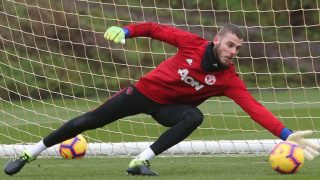 The best goalkeeper in the world, David de Gea, has warned Manchester United that their impressive start under Ole Gunnar Solskjaer will account to little unless the Reds secure a top-four finish this season.

The Norwegian inherited United in sixth place and 11 points behind Chelsea in fourth – the ultimate barrier into next season’s UEFA Champions League.

As the bridge got bigger, our chances of playing in Europe’s biggest competition next season became more slim and it did seem like an impossible task for Solskjaer.

But he has not put a foot wrong since coming in, and United are now in a position where a top four finish is certainly possible.

United also secured their place in the FA Cup fifth round on Friday night by beating Arsenal 3-1 at The Emirates.

Solskjaer has won eight of his first games in charge across all competitions.

Next up for the Reds is a home fixture against Burnley on Tuesday night in the league.

Between the sticks, De Gea stands determined to protect their winning run, hoping to build on his clean sheet tally for the season.

While the football has been exceptional at times under Solskjaer, De Gea deserves a degree of credit for saving United at the other end that matters on the pitch. His performance against Spurs may be a stand-out, however, our no.1 provides moments of brilliance most weeks and the club must ensure they progress with contractual matters.

Losing De Gea is unthinkable if United are looking to build on this winning run and to return to the sheer heights of English football.

“It’s clearly a great run of results, but we are still outside of the Champions League places an we’re very far from winning the Premier League,” De Gea told Sky Sports.

“We’re happy with the wins, but we aren’t satisfied with the overall situation.

“This is a club that should be fighting for the title, but we are gaining in confidence, and we are going to try to achieve as much as possible from the rest of the season; winning games, hopefully getting into the Champions League places and doing well in the competition.”

The tweet below gives more insight into the personality of De Gea. A humble bloke enjoying life in Manchester!

Waiting for mum at Manc Airport and she’s mega delayed thru passport control. Huge queues. @D_DeGea is a few behind her and border control look to wave him thru to the front but he declines and stays with common folk. Good lad. 👍