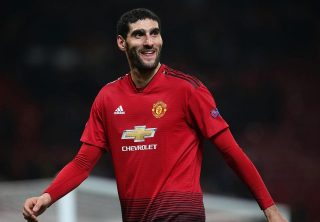 According to Sky Sports, Manchester United are in talks with a Chinese club about the potential of Marouane Fellaini.

The 31-year-old joined the Old Trafford club from Everton on transfer deadline day in 2013 for £27.5 million, as reported by BBC Sport, and has since gone on to make 177 appearances for United, scoring 22 goals.

Fellaini is currently out of action due to injury, though he hasn’t featured regularly under caretaker manager Ole Gunnar Solskjaer, who has opted for more technically sound players in midfield.

READ MORE: Like Busby, Solskjaer has made the club ‘United’ again

Solskjaer is getting the best out of players like Paul Pogba, Nemanja Matic and Ander Herrera, but United aren’t exactly well-stocked in the midfield department. Losing Fellaini may please some fans but it will leave us even lighter in numbers for the remainder of the season.

Sure, in the long run it’s an opportunity to get a player who doesn’t play every week off the wage book, after the Belgium international extended his United contract til 2020 this past summer, as per The Independent.

During his time at the club, Fellaini has won the FA Cup, League Cup and the Europa League.

Simon Stone from the BBC Sport had the update:

.@ManUtd in talks with an unnamed Chinese club over the sale of Marouane Fellaini

Fellaini was an important figure under former manager José Mourinho. The Portuguese tactician could rely upon the big man to carry out instructions as ordered even though his presence in the side contributed to some anti-football tactics.

A useful Plan B, Fellaini could be on his way out of Old Trafford before the winter transfer window shuts. He provided some memorable moments in a United shirt and always have 100 per cent.