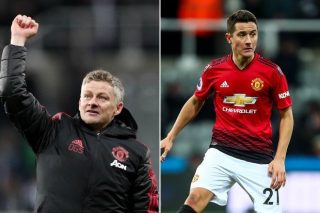 Everyone has a stand out memory of a player; whether that is Ole Gunnar Solskjaer winning the Champions League with the last kick, Wayne Rooney’s overhead kick against City or Cristiano Ronaldo scoring that free-kick against Portsmouth, almost every single Manchester United player has one moment.

Ander Herrera was typified, for me, at Anfield in 2015. Not for his work in the middle, but for the very fact he somehow managed to get Steven Gerrard sent off within mere seconds of entering the field. A typically committed challenge irked the Liverpool captain, who stamped hard on Herrera’s leg and with a quick look round to the referee, the Spaniard began writhing in agony. It’s the kind of sh*thousery United need in the middle, and was lacking greatly as he played second fiddle to Marouane Fellaini.

You’d be kidding yourself if you ranked Herrera too highly in the pecking order of Manchester United midfielders through the years. He is in there with some pretty big names, but in this side his importance is criminally downplayed and under-appreciated.

Whilst Paul Pogba scores the goals, makes the assist and gets the headlines, and Nemanja Matic (the proud owner of a new engine) parades in front of the back 4 sweeping up any potential danger, the man with the energy and work rate that allows the aforementioned pair to concentrate solely on their roles remains largely ignored. Perhaps it’s because the work isn’t as glamorous as the results?

The game against Spurs the other week reignited fans appreciation for the Spaniards’ ability, a man who has never shown anything less than 100% commitment whilst wearing a red shirt and at one point was many fans favourites for captain, a throw back to Chelsea at home in 2017 when he man-marked Eden Hazard all the way back to his house (arguably his best showing in a red shirt) and a glimmer of hope that maybe the midfield isn’t in such dire straights after all. A sign that any future acquisitions have to reach the same levels of work rate if they are to dislodge him from the starting eleven.

You will find few players more committed to the cause than Ander Herrera, and for that I absolutely adore him. ❤ pic.twitter.com/WwUhgIjVy9

He isn’t always exceptional, his true footballing ability can definitely be questioned by even his most ardent supporters. There are certainly better options in terms of creativity and talent available that will more than likely be looked at by whomever is in charge come the summer, but Herrera is the embodiment of a player who doesn’t need to concentrate on that side of his game to be pivotal to the side and has a work rate that will be harder to replace than it would seem, to simply dislodge him because a player is better would be worse than unfair.

Against Spurs he was imperious, he covered defensively and seemed to be in the right place at the right time almost systematically, and was an attacking threat in between his hard work. Even into the dying embers of the game he was on the move, in a side that is looking lethargic due to a new, energetic philosophy Herrera is perpetual energy. He repeated the feat against Brighton on Saturday. Sure having Toni Kroos might bring more assists, Kevin de Bruyne will chip in with a few goals to help the cause, but for United at this precise moment, with these players at their disposal, Herrera is the perfect fit. Captain material might not be too far from the mark.